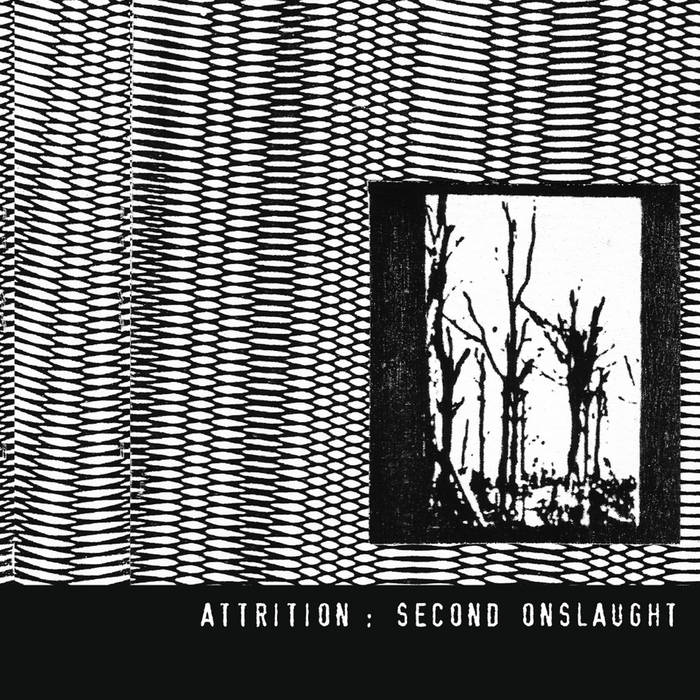 "Second Onslaught" is a re-release of Attritions seminal 1983 cassette album "Onslaught"
Originally released on the legendary "Third Mind" label, with bonus tracks from the same period.
Carefully remastered at Attrition main-man Martin Bowes studio The Cage, and enhanced with tracks from such important compilations as "Rising from the Red Sand" and "The Last Supper".
Never reissued in it's original form, this collection presents a valuable insight into Attritions early days.

All tracks recorded on 4 track cassette
in the band’s early home studio.

Back in the day I was quite a big fan of Attrition, the musical trio of Martin Bowes, Julia Niblock and Ashley Niblock. On compilations I found them always great and their early cassettes, 'Death House' and 'Onslaught' were warmly greeted. Their first LP I remember as one that was pretty good, but after that I lost interest, even when I occasionally came across a new release from them in the years following that; I am no longer sure why I lost interest. I can't remember when I last heard 'Onslaught', their 1983 cassette for Third Mind Records; surely it was ages ago. When I played this remastered version on cassette I only had a vague recollection of how it sounded back then.
For whatever unclear reason it didn't stick in my mind that much I guess. Just the early version 'Shrinkwrap' sounded truly familiar. This cassette has on side the original, thirty-minute, version of 'Onslaught and on the other side four pieces from compilation cassettes from same years. This is Attrition in its earliest phase and perhaps at their most experimental. In later years the band had a fixed form with synthesizers and drum machines along with the dual male and female voices. In this early works there is not yet the male voice (except on 'Shrinkwrap', which was already then their most completely formed song) and the songs have a much freer form. There is a synth or two; the drum machine goes through various patterns but not necessarily in a very traditional form. There is a certain 'start/stop' form they are using and at times songs are more atmospheric excursions, in which everything and everybody expand on their own, which may be a bit freaky, such as in 'First Onslaught'. There is a fine combination of experimental electronics, voices, poetry, atmospheres and a lose structure. I totally forgot about this, but most enjoyable. I immediately dug out the other two early works I had by them and had lovely trip down memory lane. (FdW)